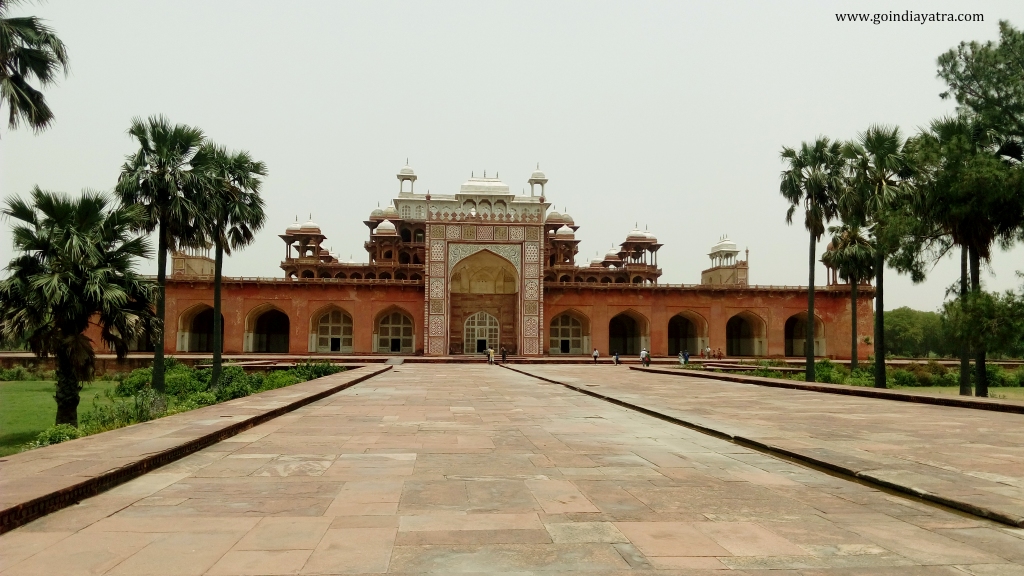 Akbar was consider as a Great Ruler in the History of India. Akbar Respect all Religions and also married Hindu Princess Jodha Bai to maintain Peace and Harmony with Rajpoots.

‘Akbar ka maqbara’ is surrounded by 4 Quadrant lush Green gardens as per Mughal Tomb’s architecture. It also represents a Concept of Heaven.

In the middle of ‘Akbar ka maqbara’ Akbar’s dead body is present.

There are some animals like Black Buck Deers is present inside which were left there during British Rule. Some Lodhi Dynasty buildings are also present in surroundings.

Akbar was a Great leader of Mughal Dynasty. He was very popular among local people and used to give respect to all religions. He was responsible for the Glory of Mughals in Art, Architecture and Trade.

Akbar’s full name was ‘Jalal-ud-din Muhammad Akbar’. ‘Akbar’ is a Arabic Word which literally translates to ‘Great’. Akbar could not read or write but he delighted Art, poetry, Music, Philosophy etc.

A few Jesuit missionary came during his Rule, He addressed them and built the first Church “Akbar’s Church” in Agra, India.

Akbar’s Tomb is located in Sikandra, a suburb of Agra. Akbar planned his Tomb during his Death Bed.

Akbar was suffering from Dysentery (a deadly disease during 17th Century) in his early 60’s and after few weeks of without recovery died in 1605.

Unfortunately he was not able to complete his Tomb during his illness. So, After his Death his son Jahangir completed Akbar’s tomb in 1613 with more artful style work.

Due to Lodhi Dynasty before Mughals, you will find Old Lodhi Palaces nearby. Mariam uz Zamani Tomb was also constructed on Lodhi’s ‘baradawari’.

Four main gates were made around tomb to maintain the symmetry. Out of them Southern gate is larger one, at the top of it you will find the large dome, surrounded by white marbles minarets at four corners similar to Taj Mahal. At the entrance of southern gate 99 names of Allah is inlayed on white marbles.

Geometric Flower patterns and calligraphic design are made in large mosaic designs with the help of White marbles and Red sandstone.

Main mausoleum is surrounded with huge walls. Ground floor is made up of Red sandstone and first floor is made from White Marbles. It is actually a Pyramid of 5 storey located on first floor. Upper story is closed for public view.

In the middle, there is a chamber where Akbar dead body is present as a tomb.

Some Interesting Information about Akbar The Great –

My Personal Experience with Akbar’s Tomb :

Starting from entrance gate till Akbar’s grave, it is fabulous to watch. If you are Photo enthusiast or History lover then you will definitely love this place. It has a beautiful gardens which is used by local people as a picnic place. This Tomb has a lot of Greenery and is a best place to relax with friends.

All Four Main Gates has beautiful Designs and a good place to take photograph. It’s beautiful designs will give you a glimpse of early Mughal architecture in India.

Thanks for visiting this website and I look forward to helping you to travel more. I am eagerly waiting for your Comments and Suggestions below.

P.S. – If you still want to know more, Read my Other blog here