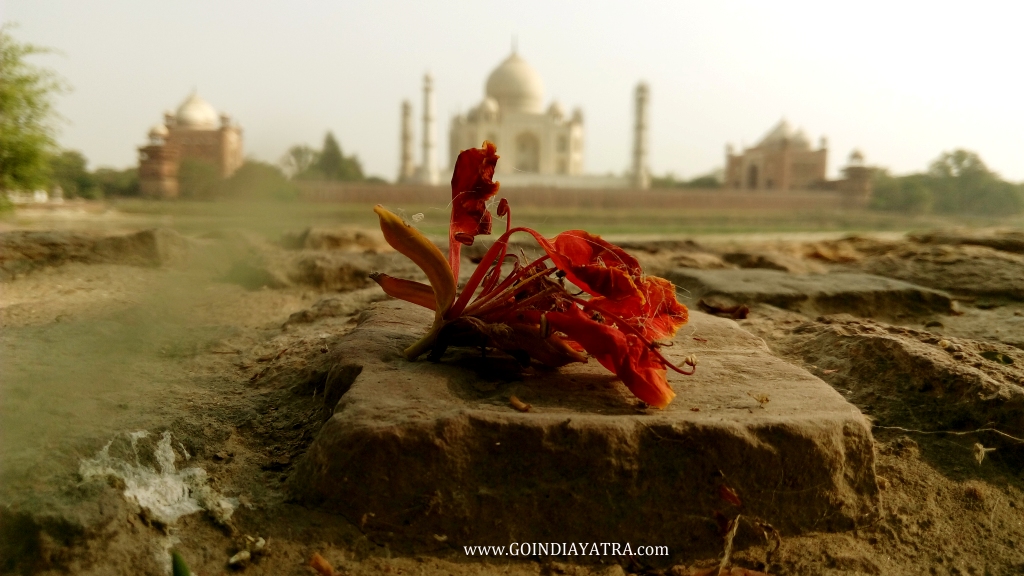 Mehtab Bagh (Moonlight Garden of Taj Mahal) was the last Mughal Garden in India built by Babur, the first one was Ram Bagh which is just 4 km from it. It was constructed in 16th Century along the river Yamuna. This place is also very famous as Moonlight Garden in Agra, located just Opposite of Taj Mahal.

Mehtab Bagh was built by Emperor Babur in 1530. Babur was very fond of Nature and built lots of Gardens like this in India.

Although Taj Mahal and Mehtab Bagh share the same width but this place is Century Older than Taj Mahal, because of it’s location Shahjahan find it perfectly place to get Moonlight View of Taj Mahal.

This Place is very famous for Sunrise and Sunset View For Taj Mahal. The Government has planted lots of flowers and fruits trees from Mughal era.

This place is located just opposite side of Taj Mahal. Other Tourist Places like Mehtab Bagh, Chini Ka Roja, Ram Bagh is nearby.

Mehtab Bagh serves as a perfect picnic place for everyone because of it open gardens and lush green area. Locally this place is very famous among romantic lovers who find it peaceful to spend some quality time.

This garden was originally designed to be a Persian style Charbagh Complex. Mehtab Bagh originally has water fountains, reflecting pools, doom like structure etc. During the Aurangzeb time and later in early 20th century, a big flood came and destroyed its beauty, turning it into large pile of sand.

During the end of 19th Century ASI start excavating and found the main Charbagh Complex. Till today they have worked a lot and trying to replicate to bring back the glory of Mehtab Bagh . Guava, Mango, citrus trees etc has been planted extensively in Mehtab garden.

The main compound of the Garden is extensively made with red sandstone and this garden believed to have four Octagonal towers, although Only one from southern part is left.

Mehtab Bagh is Green Garden, mostly of Fruits as per Mughal Tradition. There is a Old wall along Yamuna River where you view Taj Mahal Sunset. If you are nature Lover, then this serves as a best place for you. Mehtab Bagh is the Only Place to see the beautiful Sunset of Taj Mahal. Agra Fort is also Visible from there.

TIPS FOR MOONLIGHT GARDEN OF AGRA :

I hope you have got the information about Mehtab Bagh as your were looking for. If you have any questions then do comment below.