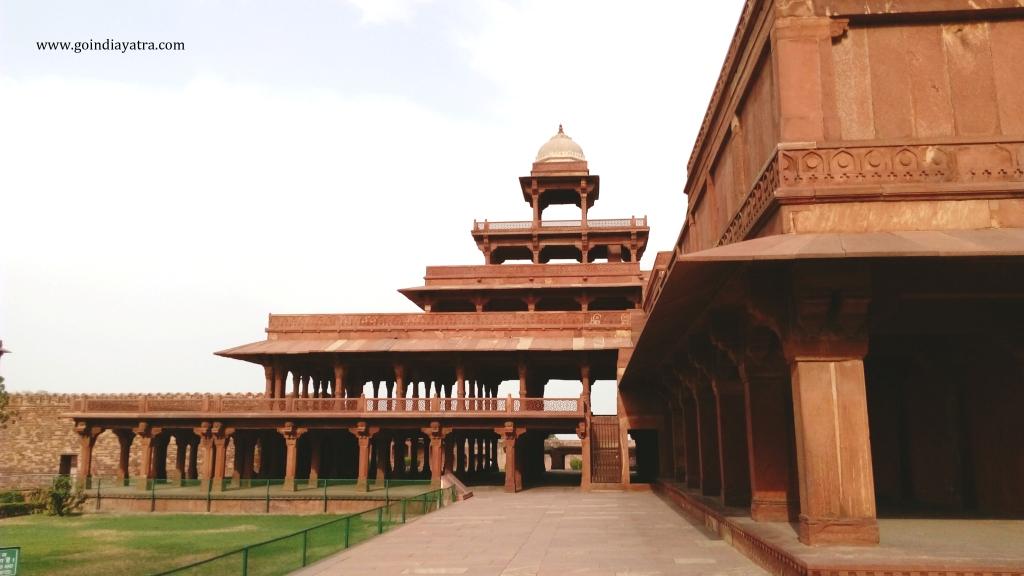 Fatehpur Sikri is a small town located 45 km from Agra. It has a beautiful Fatehpur Sikri Fort built by Emperor Akbar in 1571. Fatehpur Sikri was close to Akbar’s heart as it was a birth place of his son Jahangir and residence place of Sufi Salim Chisti. From 1571 to 1585 It serves as a Capital to Emperor Akbar, later abandoned completely because of some reasons mentioned at bottom of this Blog.

This place has a interesting story behind it’s construction. As Akbar has no Son and he was in a grief from the death of its two infant son from Mariam-uz-zamani.

A Sufi saint Sheikh Salim Chisti was very famous for his deity powers in Fatehpur Sikri. Akbar asked to pray for him. He agreed and later Jahangir was born in village of Sikri in 1569. Akbar was very impressed and became his follower.

To Honor the Saint Sheikh Salim Chisti he build a religious compound and offered him to stay with him in Agra, which he ultimately Denied.

Fatehpur Sikri construction was completed during Akbar’s Gujrat Campaign in 1573. So to commemorate it’s victory, He named it Fatehpur Sikri means City of Victory. He also constructed Buland Darwaza the highest gate of India during that time to mark his huge Victory.

Due to plenty of Redstone availability in neighborhood area, Fatehpur Sikri Fort is completely made up of Red sandstone and is surrounded by Huge Walls to protect it from Outsiders.

Some Interesting Information about Fatehpur Sikri :

There are several places to see inside Fatehpur Sikri like :

My Personal Experience with ‘Fatehpur Sikri’ –

Thanks for visiting this website and I look forward to helping you to travel more. I am eagerly waiting for your Comments and Suggestions below.

P.S. – If you still want to know more, Read my Other blog here